A lot of wildlife presenting is about getting a bigger message across. Crucial facts that viewers may not be aware of, calls to action and hopefully a moment of realisation for those who have never been in the wild. This week I felt honoured to meet and work with teams who dedicate their lives to rhino conservation.

In order to be fully protected, these rhino live in private game reserves and are monitored by rangers 24/7. They have a pretty sweet ass life and are constantly fed, pampered and get checked on. This means they are used to humans and if you approach them with slow movements and caution – one might even let you touch it! 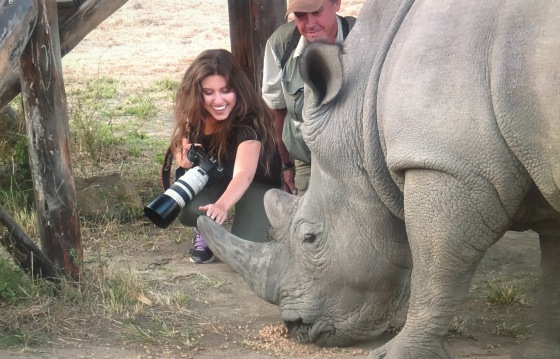 I cannot tell you how excited I was at this very moment. NEVER in a million years did I think I’d be able to touch a semi wild rhino! And of course it sneezed on me (naturally) which first sent me flying backwards and then got me laughing hysterically. And we also saw some baby rhinos.. from 6 weeks to 6 months old – adorable!! They stay close to the mom but after feeding time, real hyperactivity begins and they run around in circles like a fat kid running after cake, and then PLOOF- and they’re down for a nap. TOO CUTE!

Rhino in the wild are no different and they still need to be protected from poachers who kill them for their valuable horns. But since wild areas are so vast, the approach is slightly different. The teams there not only train rangers, but also anti poaching tracking dogs. These dogs may seem friendly at first….. 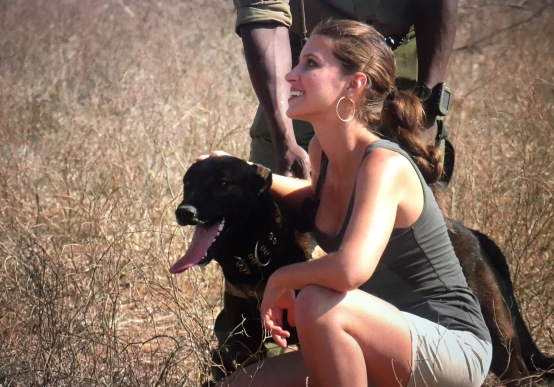 …..but don’t be fooled. I didn’t believe in their vicious hunting skills, so I got a demo.

One of the workers, Simon, put on this ultra thick bite proof jacket.

I didn’t think much of it until Simon was told to RUN. He got a 15 minute head start and ran through bushes, around trees, through thick grass, in zig zags – you name it- until he reached a hiding place. The dog was then told to sniff one of his footprints and to ‘find the poacher‘. We followed him in awe (and in sweats- DEAR LAWWWWDD those dogs can run) as he led us pretty much DIRECTLY to Simon in a matter of minutes, all whilst using a secret body language with his handler (ex: nose down means ‘I’m onto something, follow me‘, going in circles means ‘I’m confused so give me a few secs‘ and head up and running means ‘I know exactly where I’m going so we better get there PRONTO‘) : 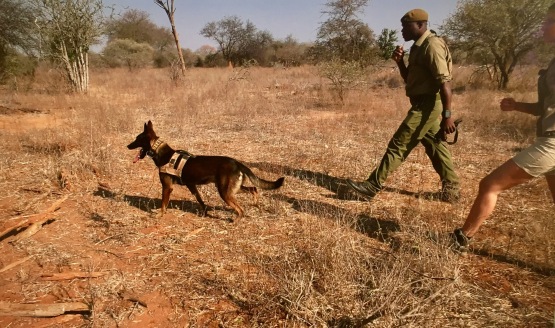 When he found poor Simon, he attacked him brutally until Simon was mercilessly on the ground. 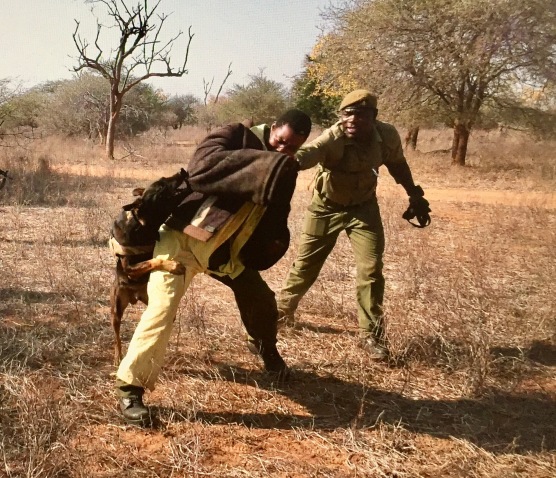 And that dog will not only bite in a place where the poacher can’t harm him, but he will also latch on until the poacher goes down. CLEVER OR WHAT?? The coolest part is that it works and the dogs have already saved rhino with this technique. The sad part is that, whilst poaching is getting worse in the area, the funding for the organisation isn’t growing so hiring more handlers/ rangers and training more dogs becomes hard. Visit their website to learn more and see how you can help.

Despite being in the wilderness, we stayed at the most beauuuttiiful lodge (Sango). Like spectacular. Glorious. Palatial. You know what? Words don’t do it justice, so here are some pictures: 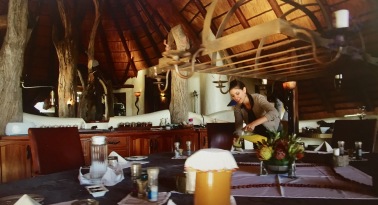 This heavenly place also happened to serve the best food I have ever had. And I’ve had lots of food. #fatgirlontheinside. Their secret is getting fresh ingredients and then making everryyything there (and with love) – the bread, the guac, the cookies, the desserts, the sauces – EVERYTHING. Even the chicken that they made with a homemade sesame BBQ sticky sauce had only been killed/ delivered the day before. As a result, I have about 5 new recipes written on my phone, so when I get back to London – whoever is reading this is invited for a dinner party.

And if you want to burn off some of those homemade nachos/ cookies/ pies/ nutella pastries, there’s also a gym with a thing called a gyro. Astronauts use it for core training apparently. So, stupidly, foolishly, in a bright moment of fitness confidence, I decided to try it:

OH DEAR LAWWWWDDD! Your ankles are strapped in and the rest of you floats freely (upside down even) with this giant contraption, as you struggle (and fail) to hold on. Result: I’ve decided that the gyro is more suitable for killing poachers than for working out.

On the plus side, I stayed alive long enough to enjoy the stunning views and we even spent an afternoon walking along the river during sunset:

Another unexpected highlight was 3000 year old rock paintings! Whilst we were walking there I expected to see some faint remains that you have to really look at to make out. How wrong I was. I have never seen anything so old that has been so well preserved in the wild! The colours are so bright, you’d think it was painted yesterday (it’s down to the mixtures they made that penetrate the rock as opposed to just covering the surface) and the stories of people and animals are clear and understandable, even thousands of years later! Incredible.